Every few months, as I'm writing my rent check, I think to myself, "Hmmmm...I could be saving so much money if I had a roommate!"  Then I realize that a.) I could also be spending a lot more money if I lived in another city/town/hamlet or even elsewhere in Charlottesville and b.) I really do love my apartment.  Particularly the fact that I have both a guest room and a guest bath, which makes hosting whole passels of family and friends from out of town very easy and enjoyable.  The weekend of my second big jam-making fest, (two weekends ago), my parents were in Cville, and this weekend, my friends and college sorority sisters M and T flew in from Boston and NYC, respectively.  For both of them, it was their first trip to the 'ville, so we made sure to pack in a lot of fun.  Luckily, the weather gods decided that Charlottesville has suffered through sufficient 100+ degree weekends, so it was gorgeous on Saturday and in the 70's and lower 80's all weekend.

M flew into Cville's wee small airport late on Thursday night, so she spent Friday doing some work and chilling in my apartment while I went to the office, and in the afternoon, we drove to Richmond to pick up T from RIC.  M had put in a request for good barbecued southern meat products for dinner, so we stopped at Alamo BBQ before jumping back on the highway.  Very, very tasty pulled pork, and scrumptious jalapeno mac and cheese!  Then, we schlepped back to Cville along one of the most boring and uneventful stretches of highway I have experienced with any sort of regularity.  Naturally, the boring car ride made us hungry again, so we stopped for Arch's frozen yogurt (a Charlottesville institution) before making it home and spending the rest of the evening catching up.
Saturday was a whirlwind of planned activities.  We got up early to try the breakfast tacos at Beer Run and then drove to Thomas Jefferson's Monticello.  They've actually added a new tour that (for an additional fee, of course) lets you do the original house tour and then a "behind the scenes" tour of the second and third floors of the house, including the family rooms and Dome Room.  We wandered around a little bit before and after our schedule tours and then headed down the mountain past TJ's grave.   I've been to Monticello a few times (both with S last August before school started and with the 'rents in April), so I've got a bunch of pictures I haven't posted anywhere else, and I might as well post them here:
After Monticello, we grabbed a late lunch at the historical Michie Tavern (yep, totally touristy, but you've got to try it once) and then spent the afternoon doing wine tastings at Jefferson Vineyards, Blenheim Vineyards (owned by Dave Matthews...no, he wasn't there, and much to our disappointment, none of the bottles magically started playing "Ants Marching" when you took out the cork), and Kluge Estate Winery & Vineyards.  On the way back towards town, we drove by Carter Mountain Orchard, where we picked up some peaches (for me) and some peach cider donuts (for T).  Carter Mountain also happens to have a wine tasting room that offers $2 tastings of Prince Michel  wines, including some made from Carter Mountain fruit, with the proceeds going to charity, so of course we had to try that, too.  Duh.  When we finally made it home, we decided to spend the evening in with a Redbox DVD (which we never watched) and take-out Indian and some more wine, and H and J (local friends) came over to join us for a bit.
On Sunday, I made breakfast (mmmm....blueberry pancakes...mmmm), then T and I dropped off M at the Cville airport, picked up sandwiches at Bellair Market, and drove to King Family Vineyards hoping to catch one of the Sunday afternoon polo matches (I'd gone with C, K, and H to the Pink Ribbon Polo match in June when it was a million degrees outside - random token photos from that below, last one of us talking to the player courtesy of C.  Note my ability to find an appropriate and color-coordinated polo hat.).  Unfortunately, the match had been cancelled due to rain the night before (and drizzle that morning), but we did a tasting and then sat outside on the patio enjoying our tasty sandwiches and the beautiful views.  Then it was back to RIC to drop off T, and the Hotel MBAyhem cleaning staff had to start doing laundry and re-making beds. 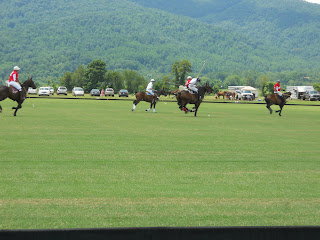 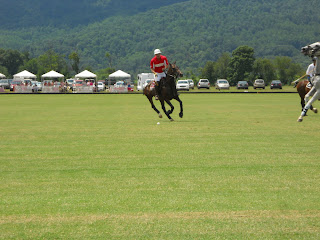 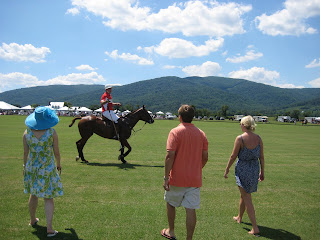