Legal MBAyhem's Guide to [Eating] in Charlottesville - Part I

[Note: I started writing this post, oh, something like six weeks ago.  Clearly, it has been sitting - unfinished -  in my blog "drafts" box for a long time.  Therefore, I've decided to publish what I have already now, and at some point when I have free time (ha!), I will post the remainder.]

In Part II of my Guide to Cville series (see Part I, on getting settled pre-school, here), I'd like to share some of my personal eating/dining/enjoying the glorious local bounty of the Blue Ridge favorites.  I've done this "Best of" style, with some runners-up.  Obviously, these are just my thoughts and opinions, and I've generally focused on foods/items that are either very convenient to North Grounds or well within the student budget.  So, I haven't focused a lot of truly "fine dining," but I think these are worth checking out!

I've broken this list down into categories that make sense to me but that may not make sense to others.  It's my blog, so I guess that's what you get...  :-)

Best Quick Lunch Near North Grounds: Bellair Market
When I was planning to move to Cville, my boss in the legal dept. at The Consulting Firm That Shall Not Be Named, a UVa Law alumna, told me two key things about dining in Charlottesville: First, a Gusburger tastes delicious after a night on the Corner, and second, the best sandwiches in town are available at a gas station on Ivy Road.  I have yet to indulge in a gusburger (fried egg+hamburger=heart attack), and I was very, very skeptical of gas station fare (though I do love me some Wawa).  However, she was right - the sandwiches at Bellair Market in the Exxon on Ivy Road are pretty darn tasty sandwiches. Plus, they are affordable and close to school.  Some of the other Exxons in the area also carry pre-made versions of the sandwiches (e.g., the Exxon at the corner of 29 and Hydraulic, on my way home), and the Exxon at Forest Lakes by Target also makes the sandwiches to order if you ever want to grab one on your way out of town.
Honorable Mentions: Padow's Hams & Deli in Barracks Road Shopping Center - North Wing (end of Millmont Street), Abbott Center dining room to-go at Darden (can't beat the convenience), and Chipotle in Barracks Road Shopping Center (sometimes you just want a big-a$$ burrito).

Best Indian Food: Royal Indian
For the record, there are basically three Indian restaurants in town: Royal Indian (by Target, so a little ways up 29), Maharaja (in the Seminole Square Shopping Center on 29 between Hydraulic and Greenbrier), and Milan (on 29 just before Hydraulic).  Charlottesville seems divided on which is best.  I like Maharaja better than Milan, but I've had people tell me I'm crazy.  In fairness, I haven't tried the lunch buffet at either because I have always been underwhelmed by lunch buffets EVERYWHERE.  But take-out from either Maharja and Milan is pretty good.  Royal Indian, however, is worth the drive if you want to sit down.  I went to try it for the first time the other day, and it may even be worth the drive for take-out.
Honorable Mentions: See above

Best Thai Food: Tara Thai
Consistently tasty food, extensive menu, close to grounds, the ability to have pad see yew and a cocktail at 2 in the afternoon after finishing your first round of b-school exams....what is not to like?  Tara Thai's pad thai is only OK, but I think it's definitely better than that from other local restaurants, and I haven't been disappointed by the rest of the menu.
Honorable Mentions: Thai 99 II and Pad Thai (I thought their pad thai itself was kind of blah, but others like it)
Stay Away From: Monsoon if you want food that actually tastes like Thai food as opposed to a sloppy concoction of random noodle-y things (you can sit outside, though, and it's just off the Downtown Mall, so decide if you're willing to consume less-than-stellar food at Downtown prices for the location/outside factor)

Best "Splurge" or Off-the-Beaten Path Lunch: Feast!
When I lived in Boston, an $8-9 sandwich was no big deal; now that I'm a student, I can't spend that on a sandwich with any sort of regularity.  However, every now and then, I need to treat myself, and the sandwiches at Feast! are truly scrumptious.  Plus, they feature a lot of locally-grown vegetables and locally-raised meat products.  Feast! is also a great place to buy tasty gourmet treats, local vegetables, local cheeses, etc. (and they would love to get more Darden/UVa law students to come in!).  Courtney of their catering staff is also fabulous and very accommodating.   It's worth the trek down West Main Street every once in a while.
Honorable Mentions: Cville Coffee (service can be slow, though - but they also host various musical performances in the evening), Revolutionary Soup (locations both on the Corner and off the Downtown Mall)

Best "Splurge" or Off-the-Beaten Path Dinner: Tie between C&O and Tavola
Both C&O and Tavola are a bit pricier (my C&O consumption has been funded by corporate sponsors prior to interviews, and Tavolo was my one nice treat to myself this summer), but they are tasty (and maybe great places to get the parents to take you when they are in town).
Honorable Mentions: L'Etoile, Mas Tapas

Best Frozen Concoction: Splendora's
I am a gelato snob, thanks to Caffe Gelato in Newark, DE, which I fell in love with when I was, oh, about 11 years old.  Best.  Gelato.  Ever.  Then I went away to college in Providence, where my roommate and I actually put together a business plan for a gelateria on Thayer Street as part of a class assignment (the horrible Roba Dolce actually opened the next year, but it was icky.)  There was some decent gelato in Boston, but nothing to write home about.  Then I encountered Splendora's.  It is super, super, super delicious, and it's REAL gelato, not a masquerading imposter.
Honorable Mentions: Arch's Frozen Yogurt (those melt-y delicious brownie mix-ins are tasty, tasty morsels of evil) and Sweet Frog (which just opened on the Downtown Mall and is reminiscent of Pinkberry).

Best Bakery: Albemarle Baking Company
You walk in, and it just smells like a bakery should smell.  Soooooooo good.  I wish they would bottle that smell.  Albemarle Baking Company has wonderful breads, melt-in-your-mouth croissants, assorted danish, and fancy schmancy cakes and tarts.  Plus, it's conveniently located in the Main Street Market (see below).
Honorable Mentions: Hotcakes (great cakes, and some tasty "gourmet" prepared items and sandwiches, as well as breakfast items and a coffee bar) and Chandler's Bakery (up 29 in Albemarle Square - tasty cookies, eclairs, napoleons, etc.)

Best Single Location to Give Yourself a Local Food Coma: Main Street Market
The Main Street Market is the home of Feast!, the Organic Butcher of Cville, Albemarle Baking Co., Orzo, Calvino Cafe and Gearhart's Chocolates.  Go.  You won't regret it (well, your wallet will, but your stomach won't).
Posted by uvajdmba2013 at 10:01 PM 1 comment:

There's something about cupcakes...

I mean, you start eating just one, and you think, "This is so delicious...but a single cupcake is so very, very small.  It's smaller than a piece of cake, right?  So I can have TWO cupcakes, can't I?  Why, yes; yes, I can."

Well, I'm feeling the same way right now, so yet again, I shall award two cupcakes at once.

....the Week 6 cupcake goes to: UVa Law! [Really, folks, this shouldn't be surprising any more.]


The calendar proof (as a reminder, purple is Darden academic/recruiting/clubs, orange is Darden social, green is Law academic/clubs, red is Law social﻿ (including softball), and blue is personal):
Now, I bet you're thinking, "Wow, it looks like your law school calendar is a lot crazier.  I mean, there's stuff all over the place!  And last year, you got a reading day on Friday!"  Well, yes, you're right.  But if we remove all of the Darden (and JD/MBA-specific) stuff from my Law school calendar, you get this: 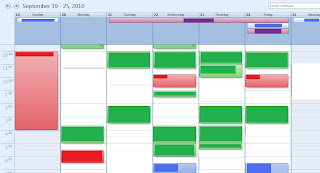 Yes, it is still crazier-looking, but then you realize that all that red and blue represents purely social events, such as softball, golf lessons, and dinners and outings with friends, whereas last year's Darden calendar was all important academic stuff.  Phooey on (and a cupcake to) that.
Part of the reason this last week was so crazy was because this week was a "Program Week" for the current Darden FYs, which meant that they did not have class and instead had time to focus solely on recruiting.  To say that the rest of the SYs and I are jealous/irritated/downright angry would be understatement.   However, for me, that meant that I had law school classes, mentoring and club meetings at Darden, club meetings at the law school, social events (including a softball tournament and two regular-season softball games), AND two Darden briefings and two recruiting dinners.  Basically, what this week taught me is that you really are not intended to do your 1L year while also staying involved at Darden....oops, guess I missed that memo!
Posted by uvajdmba2013 at 9:47 PM No comments:

Special deal on cupcakes: 2 for the price of 1!

Obviously, I missed awarding last week's cupcake, so I need to award 2 weeks' worth this time around.  All you lucky readers, therefore, get 2 cupcakes for the price of 1!
The cupcake for Week 3 goes to: UVa Law!

The cupcake for Week 4 goes to: UVa Law! 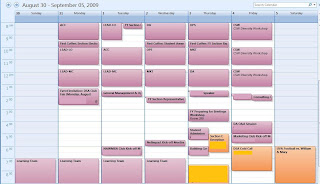 That is a snapshot of my schedule for the third week of my first year at Darden.  Things in purple are classes, recruiting events, club meetings, learning team, etc.  Things in orange are scheduled social events. You'll note that I was basically "scheduled" from 8 am to 10 pm every single day.  The "white space" was the time I had available to use for preparing cases, running errands, making food, etc.  You'll note that there is not a lot of "white space."
On the other hand, consider Exhibit 2: 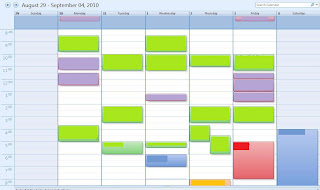 This is a snapshot of my third week in law school.  Green represents law school classes, purple is still Darden club/academic events (no recruiting currently, given the new FY schedule), red is law school social events, orange is still Darden social events, and blue is personal.  You will note two things:  (1) there is a lot less time spent in class, and (2) there is a TON more white space generally.  Consider also that most law school "homework" consists of just reading, which, although dense, is generally only 10-15 pages per class.  Contrast that to 3 Darden cases a day, which involved ~20 pages of reading AND constructing a spreadsheet/model for each class, first individually and then with your learning team.  Hopefully, you're all beginning to see why I think law school is less demanding (for now at least...)!  I guess we'll have to see how this continues.