Since school ended two months ago, I've basically been ignoring the gigantic stack of cases and tech notes and review decks and exams and various other school-related junk that has been cluttering up my bookshelf.  Yesterday, I decided that unless I did something about said junk, I was going to have to go buy another bookshelf to hold my law school stuff this year....and Ikea ain't close.  So, it was time to clean. 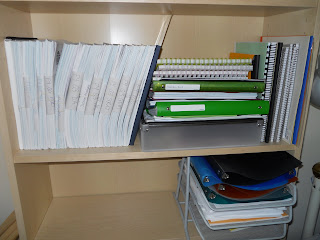 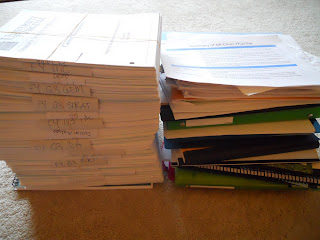 I had been pretty good about taking everything out of the binders and reusing the binders each quarter up until Q4.  But I'd also been just throwing exams and review decks and goodness knows what into a big pile. Plus, seriously, that's like 3 feet (OK, OK, maybe only 2 feet) of rubber-banded paper just flopping all over the place!  It was becoming seriously offensive to my Type-A over-organized everything-has-its-place-darnit personality.  Now, I know I could have just opted for electronic cases in the first place, but I will probably never be able to build an accurate spreadsheet using case data while I'm flipping back and forth between two windows on my laptop.  And I'm not going to lie - hard copy cases are a great crutch when you get cold-called.  Nothing says "I'm super prepared" more than flipping like a maniac through a case and muttering "I know I saw that in here somewhere....uh......"
I decided that I really only needed to keep technical notes and review decks from this year.  The cases were interesting, but I don't necessarily see myself sitting somewhere thinking, "Hmmm...I thought there was some really interesting information in that George's Tshirts case about predicting the likelihood of rain at rock concerts.  I wish I still had that case!"  I do see myself (possibly) thinking, "I wish I had that tech note on calculating inventory re-order points."
So two hours, four francy schmancy binders, and a couple packs of dividers later, I had this much "trash" to be hauled to Darden and recycled: 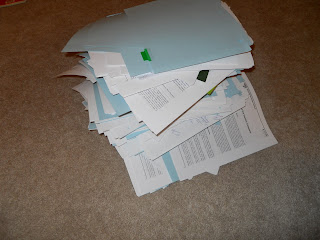 ...and a bookshelf that looks like this (bottom shelf is all empty binders and notebooks to be used next year in law school): 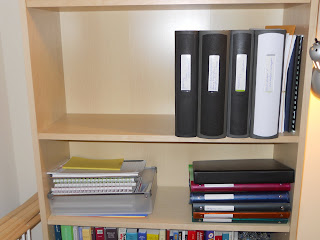