Let me be clear: I am not typically an overly outdoorsy, tree-hugging sort of person (I did hug a tree once, but I went to Brown, so it was basically required before they let you graduate).  When and if I ever own a house, I plan to hire someone to take care of the yard, because yard work really isn't my thing (and my neighbors would end up stoning me because the place would become an eyesore very quickly).  I think the local food movement is great, but I also like to eat raspberries in January.  However, all those disclaimers aside, I have spent much of the last couple months going all "crunchy granola" and becoming domestically inclined in a thoroughly "old school" sort of way.  Maybe it's just the relative abundance of free time that the summer has afforded me, or maybe it's a result of living in the "country" (or maybe it's both...), but I've been rusticating to an extent that has started to frighten even me.
It started innocently enough, I suppose.  When my parents and sister came down to visit for Easter (yep, I cooked Easter dinner this year), my father brought with him some tiny little mint plantings for me.  Mojitos are one of my favorie summer time drinks, and I maintain that you shouldn't be permitted to live in Virginia if you don't have all the makings of a mint julep on hand at any time, so this seemed like a good idea.  Plus, I already knew that I'd be spending my summer in the Charlottesville area rather than abandoning my apartment for the summer like many of my classmates with exciting jobs in exotic locales, so that meant I'd be around to water plants and all that stuff.  Well, the mint seemed to start me down a slippery slope.  I decided that if I had mint, I might as well have basil (for homemade pesto, another my summer favorites) and other herbs, too.  And while I was making the trip to Lowe's for window boxes and potting mix and seedlings, I might as well buy one of those nifty little upside down tomato growing pot thingamajigs, too, right?  Right.
Three months later, I have realized that there is either some sort of plant equivalent of steroids in the water here, or I actually may have a wee little bit of a green thumb.  Who knew?  The herbs are out of control, I've had to repot the tomatoes because they over-grew their original hanging pots and became slightly suicidal (one of the two pots spontaneously plunged two stories to its almost-demise), and I decided to diversify into peppers, too. 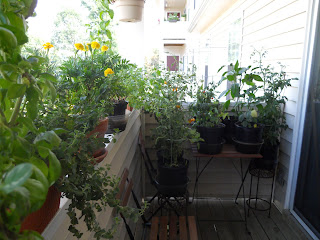 Yep, I'm basically running a garden/mini-farm off of my little apartment porch.   My tomatoes have been very tasty... 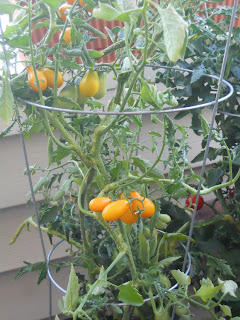 ...and I've been trying very hard to be patient while this guy ripens (but I am not naturally a patient person): 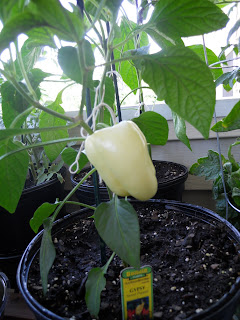 I've really been enjoying having fresh herbs for the aforementioned summer cocktails and pesto and other tasty treats, and I also bought an ice cream maker and made fresh homemade mint chocolate chip ice cream (and strawberry frozen yogurt with fresh-picked strawberries).   I brought the tasty frozen products to a BBQ a friend hosted, and they got rave reviews.  Yay!
In addition to my sudden urge to become a gentlewoman farmer (inspired by our man Thomas Jefferson, but minus the whole land-owning part) and purveyor of frozen delights, I developed an almost unhealthy obsession with the ancient art of canning.  By canning, I mean preserving various tasty foods in glass jars, of course!  I don't exactly know what inspired my desire to take up this new hobby, but it *may* have been related to my childhood love of going to pick fresh fruit.  Picking (and eating) locally grown fruit with my own two grubby little hands has always been a summer-time ritual in my family.  Now that I live alone in a climate and location that again permits me to partake in said activity (Rhode Island and Massachusetts were great for apple picking, but not much else), I needed a way to ensure that the fruits of my labors (literally and figuratively) didn't go to waste.  Because really, in my mind it's not worth it to drive out to the middle of nowhere to spend time picking fruit if you're only going to pick what you can eat in the next day or two.  Plus, homemade jams and jellies are both tastier and healthier than the ones you can buy at the store.  And I like to cook and bake, so canning seemed the next logical step in my own personal domestic diva development project.
So I invested in a boiling water canner ($20 at the local Wal-Mart) and all the little necessary gadgets like jar lifters and lid lifters and canning funnels.  Oh, and the jars (which a friend of mine had to special order in Massachusetts but which are sold in grocery stores and WalMart here in more sizes and shapes than you might imagine).  I purchased so many jars at Wal-Mart that the cashier closest to the door by the housewares section and I were on a first-name basis.  For my first attempt, I chose strawberry jam.  It went so well (and tasted so good), that naturally I had to go cherry picking and make things with the cherries, so I made preserved cherries in almond syrup (delicious spooned over homemade vanilla bean ice cream) and cherry raspberry compote.  And then, because I was feeling pretty good about my mad canning skillz at this point, I made bread and butter pickles.  Yes, I did this all within the first week of owning a canner.  I may or may not be slightly obsessive about new hobbies (and again, I don't have homework, so what's stopping me?) 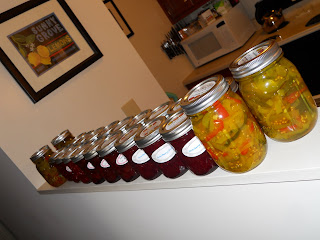 The results of my first week of canning: jam, compote, preserves, and pickles
Week 2 of my new addiction - er, hobby - conveniently coincided with the start of peach season and raspberry season, and Week 3 marked my first trip to the Charlottesville City Market (the big Saturday farmer's market downtown).  During these weeks, my canning repertoire expanded to include dill pickle slices, Oktoberfest beer mustard (no seasonal ingredients involved, but who cares?), golden relish, raspberry jam, chocolate raspberry sauce, peach salsa, berry wine jelly, and blueberry chutney.  Brianne even came over for a canning "lesson" (I use the term very loosely) when I made the chutney. 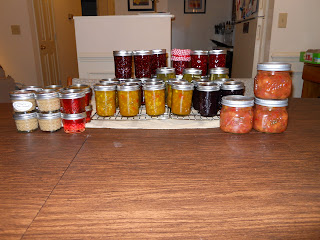 From left to right: (front "row") Oktoberfest beer mustard, berry wine jelly, golden relish, blueberry chutney, peach salsa; (back "row") chocolate raspberry sauce, raspberry jam
Once I had made all of these tasty treats, I had to figure out where to store them.  I already keep a fairly well-stocked pantry (no real surprise there), and since most people don't have a root cellar these days (you should store glass jars of fruits and vegetables in cool, dark places so that the light doesn't lead to discoloration), I had to clean out the shelf in my coat closet in order to hold lots and lots of jars.  I also put together a gigantic basket of homemade treats as a gift for Father's Day (my mother hates sugary sweet things like jams and jellies, so she got a jar of bread and butter pickles and Dad got everything else).  Everyone else should be forewarned that I will be gifting canned goods from now and until eternity...
My last domestic rustication effort of the summer (so far) has included making all sorts of side dishes and tasty morsels for barbecues and picnics and whatnot in town.  One of my friends threw a surprise b-day barbecue for his girlfriend, and I offered to make the cake (this same friend once challenged me to a bake-off...after two months of talking smack, he finally forfeited after the aforementioned b-day barbecue).  Since I was feeling particularly ambitious, I actually decided to make a round layer cake AND to hand write the birthday wishes; I usually cop out and make a sheet cake, frost it in the pan, and buy "Happy Birthday" candles.  My focus is taste, not appearance.  But I think that this one looked pretty good (and certainly tasted good - red velvet cake with cream cheese frosting....mmmmmm), if I may say so myself: 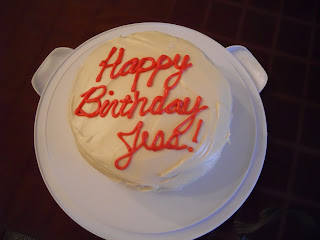 I've been taking some time off from rusticating due to travel plans for the last three weekends, and I've been spending several of my evenings doing fun exciting things like organizing my case materials, ironing, and all that other stuff that you can do inside in the air conditioning (it was one of the hottest Junes on record in Charlottesville).  Since I'm in town again this weekend for the first time in a while, and I hear that it's blackberry season, I'm thinking I might need to bust out the canning materials again...
Posted by uvajdmba2013 at 9:37 AM