I hereby declare Winter to be over

I'm playing mind games with Winter. Yes, it did snow today in Charlottesville.  Yes, I know that Spring doesn't officially start for almost three more weeks.  But I have decided to throw my parka in the wash, pack up my hats and scarves, stow the big bad snow shovel, and remove all of my winter pictures from my camera and post some of them here.  Therefore, I announce that Winter is over.  Do you hear that, weather gods?  YOU ARE DONE!!!  Mwhahaha!


When I started planning to move to Virginia after 7 years in Providence, RI and Boston, MA (including above-average snow fall each of the last two years...and the average is ~45 inches), everyone said, "Oh, Virginia.  It only snows once or twice a year, and it snows MAYBE five or six inches, MAX.  Plus, it melts right away."  I should have known they were all lying to me when it actually snowed on the day that I came to interview.  But anyway...I was expecting snowfall like this, which we got during the first weekend of exams in December: 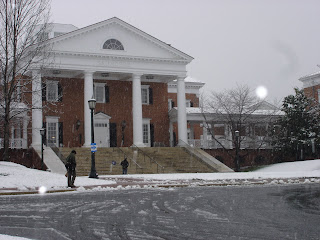 See, it was kinda rainy and gross, barely sticking to the roads. 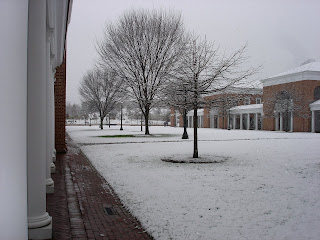 You could still see the grass peeking through in Flagler Courtyard! 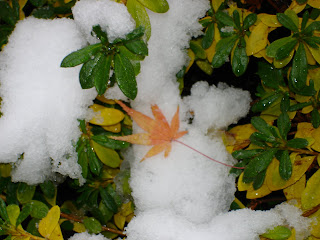 There were still living plants! 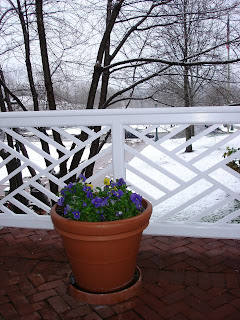 ...and Darden hadn't even removed the flower pots!
Yes, well, snow like that would have been all well and good.  Then we got 2 feet during the weekend before Christmas.  The city, county, and state shut down.  More than 48 hours after the storm ended, I left to drive home to Delaware, and I didn't see a completely clear lane of roadway until I got two counties north on Rt. 29.  I realized then that Virginians have no idea whatsoever how to deal with snow.  OK, maybe that isn't fair.  Virginians who have previously lived in New England have a vague idea of how one should properly deal with snow.  Most Virginians panic, in the "OH MY GOODNESS!!!  It is going to SNOW!!! I have to run to the grocery store immediately and stock up on bread, milk, cat food, snacks, beer, etc., BECAUSE I MAY NEVER BE ABLE TO LEAVE MY HOUSE AGAIN!!!!" sort of way.  Do Virginians do proactive things, like salt or sand roadways?  No.  They do not.  In fact, they wait to start plowing or shoveling or doing anything to deal with the snow until there is more than a foot on the ground.  I want to start some sort of educational program for the local municipalities.  Furthermore, I want to issue a public service announcement to Virginia drivers:
"Attention, Virginia drivers.  Please consider the following tips for traveling in snow.  First, if you do not have 4-wheel drive and there is more than a foot of snow on the road, DO NOT DRIVE.  Second, if you do not know how to drive in snow, DO NOT DRIVE.  Even if you do have 4-wheel drive, do not drive if you are going to go either 5 mph or 80 mph in the snow.  Neither option is particularly safe.  Third, if it snows, please clear the snow off of the top of your car before it hardens into a rock-solid chunk that will go flying off of the back of your vehicle once you start driving, causing considerable consternation to other drivers behind you.  Fourth, if you see that your female neighbor has spent an houring shoveling out her car, including hauling shovelsfull of snow to the opposite end of the parking lot so that it does not block anyone else in, DO NOT MOVE YOUR SNOW-COVERED CAR TO HER CLEAR SPOT, leaving your snow-covered spot to ice over; that's just rude.  Your adherence to these four tips will make snowy winters far more pleasant for all Virginia residents.  Thank you."
Clearly, as a snow-hardened, grizzled New Englander, I was frustrated by the local response.  But again, I thought, "Hey, this must be the odd one-off situation that happens once in a blue moon.  I've dealt with it, and now I should be able to get through the rest of the winter snow-free."  Right?  WRONG.
It seemed to snow every single weekend through late January and February (and only on weekends!).  I had to cancel numerous trips to DC to visit friends, which meant that I felt snowbound every single weekend, and the cabin fever became ridiculous.  My #1 way to spend free time was shoveling out/off my snow-covered car (yeah, with that much snow, those little snow brushes are worthless - see below). 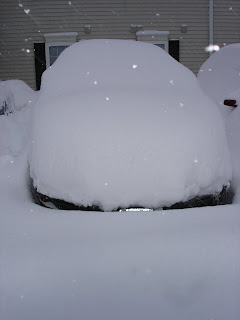 Grocery stores constantly had 30-40 minute check-out lines as every Charlottesvillian panicked, storm after storm.  (Seriously, if it snows on Tuesday and you go to the grocery store on Monday to prepare for Snowmageddon, do you really need more food on Thursday in preparation for the Friday storm?  How much do you eat?) As my friends and younger sister in DC got day after day off from work, I didn't even get a single stinkin' snow day (the University cancelled classes on one Friday because there was a state of emergency, but Darden had a Reading Day anyway, so there was no incremental benefit to me)!  The outrageousness of it all!
However, during the second 2-foot storm, I decided to take the camera out and get some nice pictures of Darden and the central UVa grounds, because I do actually like snow (but I like it more when there is public transportation, when people know how to deal with it, etc.).  I thought some of you might enjoy! 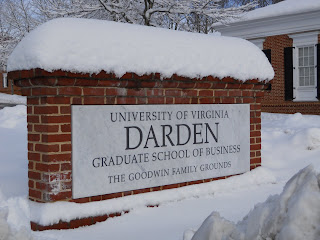 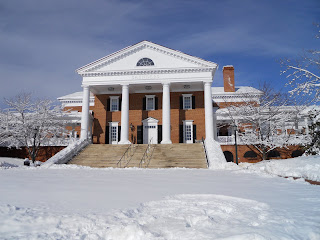 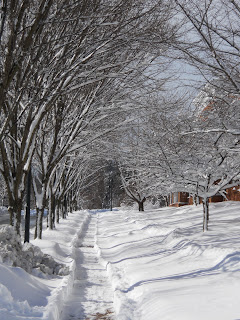 The tree-lined driveway to the faculty parking lot. 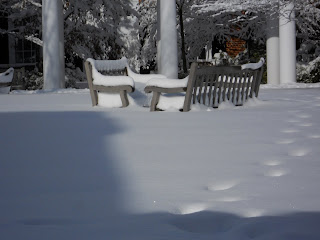 Kind of hard to sit on the benches, huh? 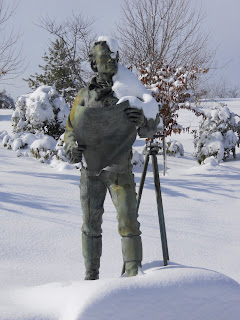 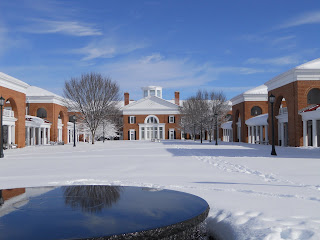 Flagler Courtyard and the fountain, looking towards Saunders. 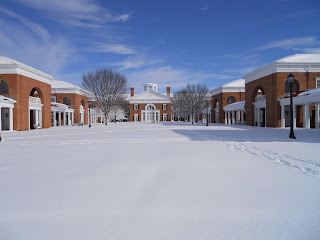 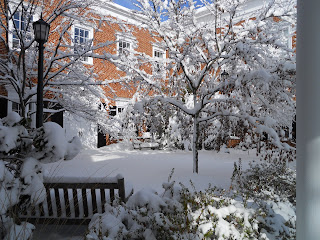 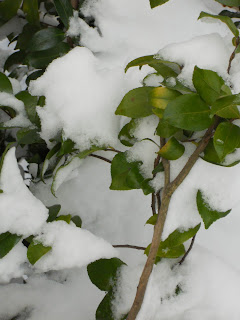 I love the contrast of green leaves and snow. 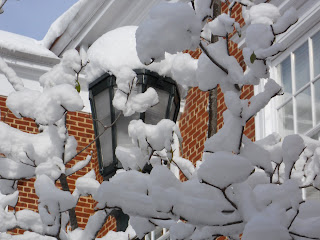 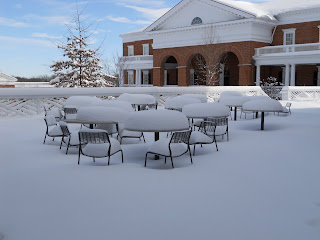 Anyone for lunch outside? 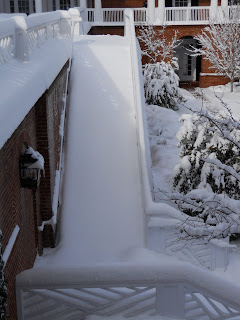 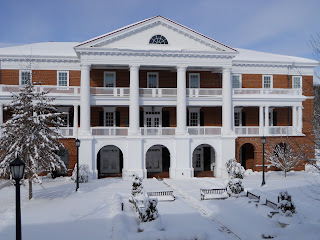 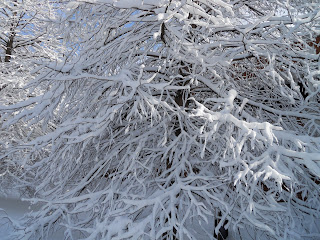 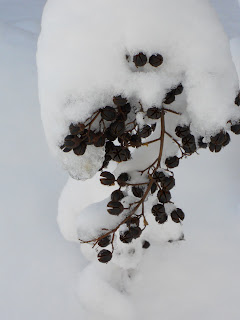 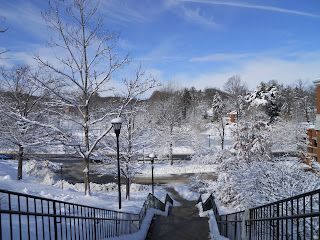 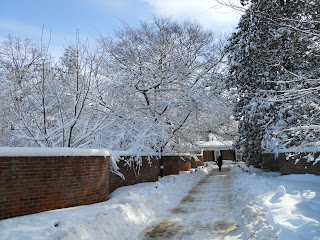 Walking towards the Lawn. 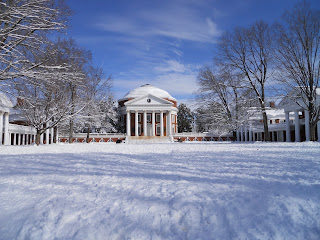 The Rotunda, from the Lawn. 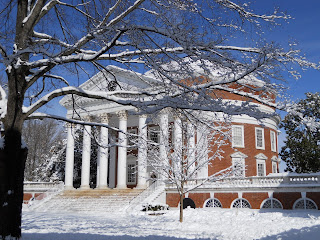 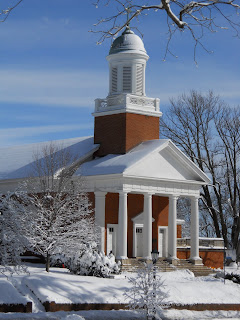 The Episcopal church near the Lawn (St. John's, maybe?). 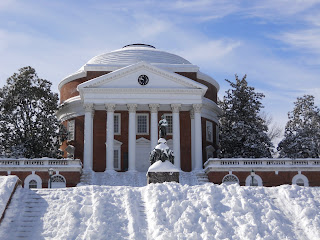 View of the Rotunda from University Ave.  Clearly the undegrads had been sledding.  I miss "borrowing" dining hall trays to sled down College Hill in Providence. 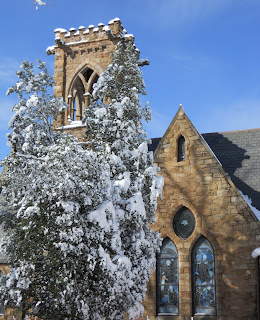 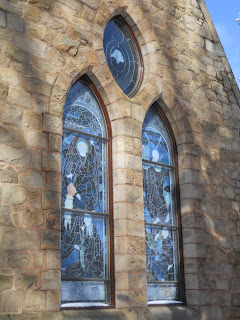 See, wasn't that pretty?  Unfortunately, now that I have decreed that winter is over, all we are left with is the big heap of parking lot snow we have dubbed Mt. Barracks: 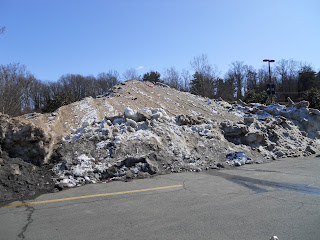 The Barracks Road Shopping Center people covered it in sand so people would stop sledding.  Killjoys.  Darden students, ever-inventive and very good at monetizing anything they can, have a bet going as to the day that Mt. Barracks finally melts, and if you are actually still reading this blog post, you must have time to kill, and you should check out the Cold Call Chronicle article about climbing Mt. Barracks.
Posted by uvajdmba2013 at 11:49 PM