You know Spring is just around the corner when...

...LACROSSE SEASON STARTS!!!  Yes, I know most people do not get this excited about lacrosse season.  However, I am my father's daughter.  For those of you who do not know my father, he played lacrosse growing up in Baltimore and all throughout high school and college.  He subsequently officiated high school and college games up until having two knee replacement surgeries in the last several years.  When my father officiated, my younger sister and I came along to games.  During our younger years, we were bored out of our little minds.  We used to pray that the high school to which we were dragged also had an affiliated grade school so that there would be a swingset or something to occupy us (shout out to Tatnall, which had by far the most entertaining facilities).  But by the time we were older, we actually enjoyed watching the games.  We also owned pee-wee sized lacrosse sticks as kids.  We played in grade school.  I started playing in high school and then ended up with the world's most evil lacrosse coach (long story, but if I had continued to play for her, I am fairly sure I would have ended up in the hospital and my high school would have had a very unpleasant legal situation on their hands), so I quit, and I think my father and I had the single largest fight we've ever had about my quitting.  I then "managed" the mens' team.  Anyway, my history aside, I like watching lacrosse, and I am particularly excited now that I go to a university with the No. 2 ranked men's lax team and the No. 12 women's team!  It doesn't hurt that the lax stadium is a mere 5 minute walk from Darden.


As part of my exam procrastination - er, I mean, studying - regimen this weekend, I went to the men's game against Stoneybrook on Saturday.  It was a little chilly, and the fact that there were four-foot mounds of snow surrounding the turf field seemed moderately odd, but it was fun!  It was clearly early in the season, so play was a little bit sloppy, but we won, and hopefully I'll have a chance to attend more games this season.  I'm very sad that I'll be missing the Syracuse game next week, but I think I'll be able to get over it since I'll be in BARCELONA (more to come on that).  In the meantime, I thought I'd share some of my attempts to be a sports photographer (here my father also puts me to shame - since he no longer officiates, he's moved on to photographing high school and college games.  He has a fancy schmancy camera and stands on the sidelines.  I am technologically challenged, so this is the best I could do from up in the stands with a tiny little Nikon Coolpix.): 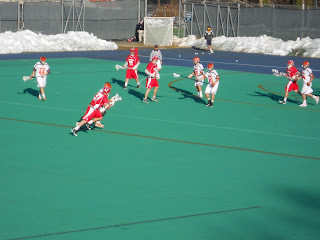 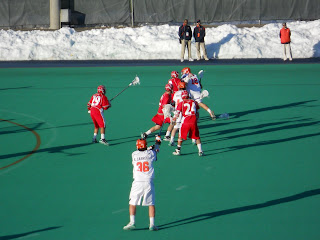 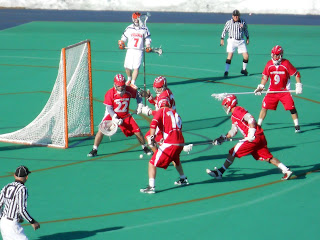 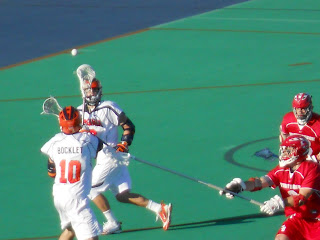 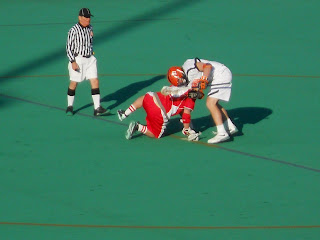 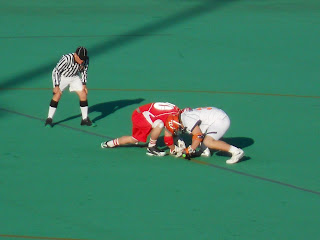